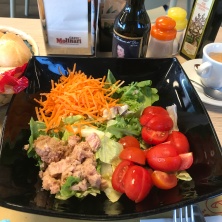 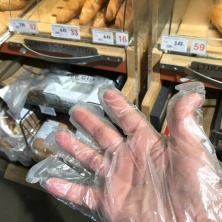 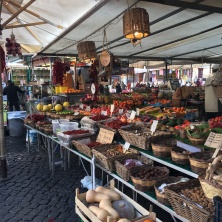 A few weeks ago my North American friend and I were talking about how there seems to be lack of fresh vegetables menu options in Italy. She had mentioned it was true in Croatia as well. We were commenting on how veggie-only dishes are all overcooked, bland vegetables. Also, if a restaurant offer salads, they consist of lettuce, shredded carrots, canned corn, tomatoes, and maybe olives and/or tuna. Salad dressings just don’t exist like in the States – they prefer just olive oil and vinegar (which is totally fine with me).

But why is there such a lack of fresh vegetables?? Speaking from a Northern Italy perspective specifically since I live up here, there is an antiquated belief that fresh lettuce harbours bacteria that can cause disease. In fact, pregnant women just don’t eat raw veggies at all. I have mentioned before that Italians are very traditional. This extends into beliefs about food and the weather, not just in traditions around holidays. I have also mentioned that different countries teach different ideas around science and medicine. I find it the attitudes around fresh fruits and vegetables fascinating. I feel like I have stepped back in time.

A couple of days ago I was chatting with an Italian friend of mine who is brilliant. It’s also important to mention he is on the Autism Spectrum (this statement only helps to understand his reactions to some situations). We were chatting about Climate Change and he was concerned about what could be done, if it wasn’t already too late. I had mentioned that the reduction of plastic would be one small step that people could each contribute to. Italy uses a ridiculous amount of plastic, akin to plastic use of the 1980s in the States. I specifically called out the misguided use of plastic gloves to pick out produce. Each store has a box of disposable plastic gloves so people can select their produce, put the produce in plastic bags, throw away the gloves, and then take the produce to the check out. As you can guess, I refuse to use the stupid gloves. When I had mentioned this to my friend, he said, “it’s a matter of hygiene.” I asked if they wash their produce before cooking or eating it? And, if it was a matter of hygiene, then why don’t the use gloves for everything? People touch boxes, jars, the shopping cart/trolley handle, buses, etc. Why do they think that they only need it for produce. He simply said that is what they have been taught, but still could not accept that it was an outdated and wasteful practice.

Often, when a dish of veggies are offered on a menu, you get a very overcooked (steamed in water) plate of eggplant, zucchini, maybe cauliflower, and I can’t remember the other typical veggie. It’s not appealing at all. Once I put grana (aka Parmesan Cheese) on my veggies and was quickly informed that cheese is only for soups and pasta, but never fish. (insert eyeroll here).

Despite these ideas seeming archaic to us, they are very real and relevant for Italians. I will acquiesce to some practices (like no cheese on meat), but I refuse to use the plastic gloves. This is no means a suggestion to follow my lead, but more of a “heads up” that these ideas and practices exist.

As for getting your salad fix, this is when you will need to find a popular tourist joint. They have the best salads! I wouldn’t eat much of anything else at those places, though. Get your traditional food at little, local osterias, and buy your fruit and vegetables at a fruttivendolo. Sweet potatoes, cilantro, and plantains you can find at little ethnic markets.